The New Writing Series welcomes fiction novelist, poet, and translator Idra Novey to the University of Maine campus for a reading on Thursday, November 9, 2017 at 4:30pm in the Allen and Sally Fernald APPE space (104 Stewart Commons). The reading, which is free & open to the public, will be introduced by  Greg Howard and followed by a Q&A with the audience.

Idra Novey is the author of the debut novel Ways to Disappear, winner of the 2017 Sami Rohr Prize, the 2016 Brooklyn Eagles Prize, and a finalist for the L.A. Times Book Prize for First Fiction. Her poetry collections include  Exit, Civilian, selected for the 2011 National Poetry Series, The Next Coun­try, a final­ist for the 2008 Fore­word Book of the Year Award, and Clarice: The Visitor, a collaboration with the artist Erica Baum. Her fiction and poetry have been translated into ten languages and she’s written for The New York Times, The Los Angeles Times, NPR’s All Things Con­sid­ered, New York Magazine, and The Paris Review. She is the recipient of awards from the National Endowment for the Arts, Poets & Writ­ers Mag­a­zine, the PEN Trans­la­tion Fund, and the Poetry Foundation. She has also translated the work of several prominent Brazilian writers, most recently Clarice Lispector’s novel The Pas­sion Accord­ing to G.H. She’s taught at Prince­ton Uni­ver­sity, Columbia, NYU, Fordham, the Catholic University of Chile, and in the Bard Prison Initiative.  This fall she will be the Visiting Writer at the Stella Adler Center at NYU. This will be her first appearance in the New Writing Series. 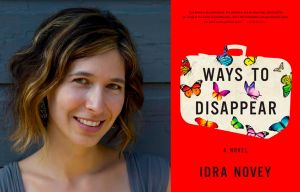 The UMaine New Writing Series was founded in 1999 and is sponsored by the English Departmentand the National Poetry Foundation with support from the Office of the Executive Vice President for Academic Affairs and Provost, The Fiddlehead Fund, the New Writing Series Fund, the Lloyd H. Elliott Fund, the Milton Ellis Memorial Fund, the Honors College, the Clement & Linda McGillicuddy Humanities Center, and the Cultural Affairs/Distinguished Lecture Series Committee. Grateful acknowledgment is made to the IMRC, and to donors Allen and Sally Fernald, for use of the Fernald APPE space.

If you have a disability that requires accommodation for a NWS event, please contact the office of Student Accessibility Services, 121 East Annex, 581-2319 (Voice) or 581-2311 (TDD).

The authors who appear in the NWS write for adult audiences and make use of a wide spectrum of language and subject matter. We are happy to advise parents and secondary school teachers about the suitability of specific events for their children or students. Just contact Series coordinator Steve Evans at steven dot evans at maine dot edu or at 207-581-3822 a few days in advance.

The University of Maine does not discriminate on the grounds of race, color, religion, sex, sexual orientation, including transgender status and gender expression, national origin, citizenship status, age, disability, genetic information or veteran’s status in employment, education, and all other programs and activities. The following person has been designated to handle inquiries regarding nondiscrimination policies: Director, Office of Equal Opportunity, 101 North Stevens Hall, 207-581-1226.