On 22 February 2007, the New Writing Series will host a reading by this year’s winners of the Steve Grady Awards in Creative Writing. Check out their bios, below, and be sure to come by to celebrate their accomplishment Thursday at 4:30pm in the Soderberg Auditorium on the UMaine campus in Orono.

Megan Arsenault is twenty-two years old and was raised in Owls Head, Maine. She is an English Major at the University of Maine with a concentration in Creative Writing. She has attempted to write both poetry and fiction, but prefers fiction. She is graduating with a bachelor’s degree in May, and plans to pursue her writing much more intensely after graduation. Megan has been writing since a young age, and the story that she entered was originally 60 pages long and was used as her final manuscript. Arsenault won second prize in the undergraduate fiction category for her “A Fisherman’s Tale.”

Jason DiGioia is a senior English major, creative writing concentration, graduating this summer (finally), came in second place last year in the Grady event, absolutely despise speaking in front of crowds, but my dedication as an English student overrides this on occasion. DiGioia won first prize in the undergraduate fiction category for “The Litochondriac.”

Polaris Garfield is a 4th-year English major with a concentration in creative writing and a political science minor. She transferred to the University of Maine in 2005 from San Diego State University. Polaris lives in Orono and works as a tutor in the UMaine Writing Center and also as Head Copy Editor for The Maine Campus. She is currently working on two collections of poems, one of which comprises her submission, “Rainy Day Poems” (first prize undergraduate poetry). After graduation, she plans to pursue a career in editing and publishing while continuing to write poetry and fiction.

Ashlyn Giles is a 4th year English, Creative Writing major who is joyously receiving her undergraduate degree this May and then promptly moving to Driggs, Idaho in the foothills of the Teton Mountains to explore life, love and, perhaps, work ethic. She has thus far in her life traveled widely, taught justice, worked for peace, loved much and many, climbed tall mountains and grew gills in the sea. She thanks her family for daring her to be quiet for five minutes when she was young and instructing her to write her words down instead—but never quieting her voice. Quoting Pablo Neruda, she also feels that “a poet must achieve a balance between solitude and solidarity, between feeling and action, between intimacy of one’s self, the intimacy of mankind, and the revelation of nature.” But maybe it was her sister who wrote her bio best in a haiku: “creative, beautiful / unyielding strength and purpose / blossoming, becoming, being.” Giles won second prize in the undergraduate poetry category for “Pacing in Words.”

After spending a profitable winter break arms smuggling in Haiti, Nick Mohlmann was called back to the United States upon the death of Gerald R. Ford to comfort his friend Dick Cheney. Have you ever seen a fat man cry? It’s not pretty. Nonetheless, Nick has returned to us and perhaps it is appropriate that he shares a birthday with Tammy Faye Bakker as his poetics derives, in part, its language and cadences from the particular patois of the Southern Evangelists. Nick’s work thrives on oppositions and contradictions; the innocent and the depraved, the beautiful and the grotesque. Salvador Dali once said “The only difference between a madman and me is that I am not mad.” With Nick, this statement could perhaps be amended to “The only difference between Salvador Dali and me is that I am Salvador Dali.” Mohlmann won second prize in the graduate fiction category for “Angel Fluid” and second prize in the poetry category for “Prelude to an Exodus and Other Poems.”

Kiera Seekins is a first year graduate student. She is interested in the way thoughts become speech or emerge out of a pen—arduously, accidentally or automatically. What can words do in the world. Something—not always what we expect. Seekins won first prize in the graduate poetry category for “89% Theater.”

Ryan Weibush was born in the Mid-Western United States where he learned to read and write and to play with others. He has since combined the three, but is still working out all the kinks. Weibush won first prize in the graduate fiction category with “Isn’t That What I Needed Never?” 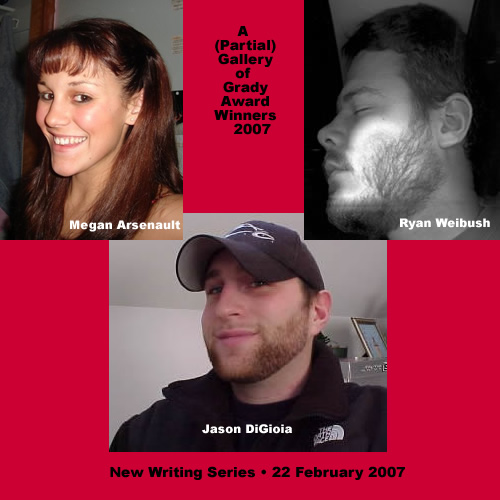 The poets Jonathan Skinner and Annie Finch read to an audience of approximately twenty-five people in a special evening event in the New Writing Series on 8 February 2007. Skinner’s set included four poems from the title sequence of his book Political Cactus Poems, several pages of his chapbook length collaborative poem with Jane Sprague, Entropic Liberties, and a substantial preview of his work in progress, “Wetlands,” including the long sequence on New Orleans called “A Natural History of Levees.” Finch recited a poem from Encyclopedia of Scotland from memory to start off her set, then read several poems from Eve, before settling in with numerous poems from Calendars. She also read from and discussed her translations from the French of Louise Labé. After the reading, the poets entertained questions from the audience and spoke on topics including environmentalism, pagan spiritual practices, the relationship of meter to magic, ecological “edge effects,” the Troubadors, and bird song.

Archival record. A digital videotape recording was made of the event. In addition to the dv masters, vhs and dvd duplicates will be available shortly. An 8-bit mp3 recording of the reading was made, as was a standard audiocassette recording. Contents: event introduction by Steve Evans, reading by Jonathan Skinner, reading by Annie Finch, questions and answers with the audience.

The poets discuss their work with audience members: 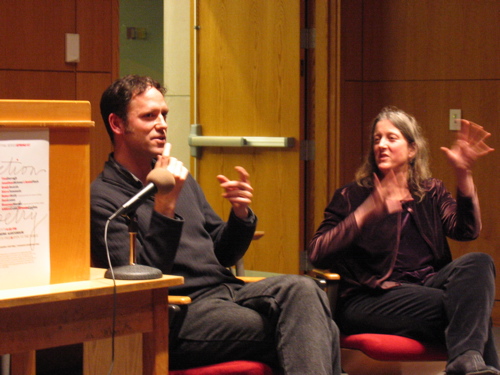 Annie Finch talks about the special wedding rings she and her husband exchanged: 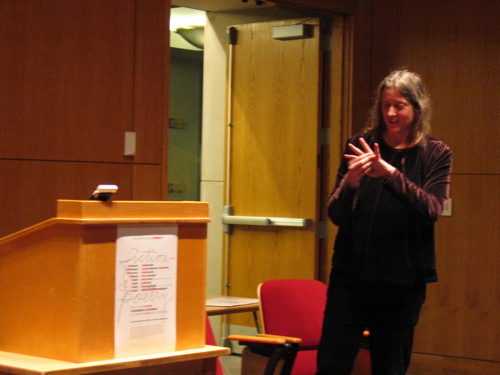 Jonathan Skinner at the start of his reading: “iPod, youPod,” he quipped: 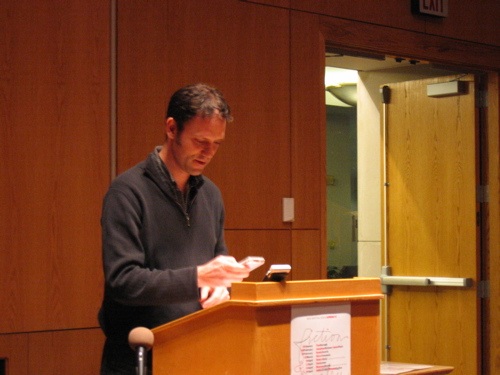 On Thursday, 8 February, the NWS will host a special evening reading (start time 7:30pm, Soderberg Auditorium) with two poets who have recently made Maine their home. 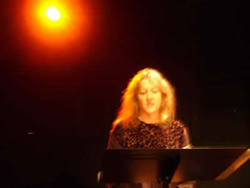 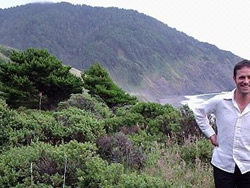 Self-styled “postmodern poetess” Annie Finch is the author, most recently, of The Encyclopedia of Scotland and Calendars. Since 2005, Finch has directed the low-residency Stone Coast graduate creative writing program at the University of Southern Maine. Her extensive webpage includes sample poems and even some sound files. You can hear Finch interviewed, live in Tompkins Square Park, by poet Amy King of miPOradio here.

Jonathan Skinner is the author of Political Cactus Poems. He recently joined the faculty at Bates College, where his focus is on Environmental Studies. You’ll find a link-rich feature interview with him at Here Comes Everybody. Back issues of ecopoetics are available here. And a pdf (with embedded soundfiles) of Little Dictionary of Sounds can be found here.